Transformation of an existing house 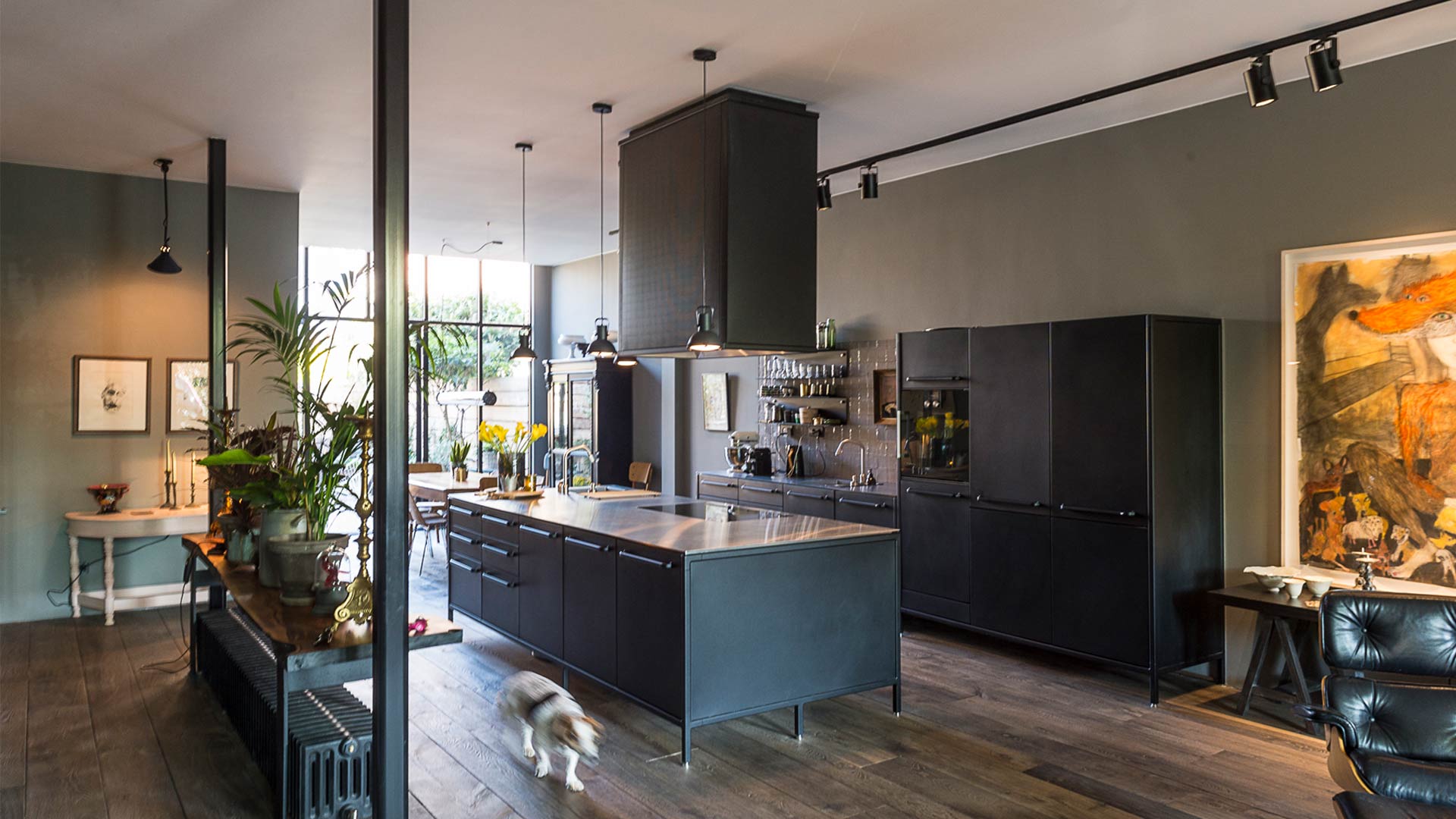 The monumental facade of the building is protected under the city’s Preservation Law. The house was originally designed with two rooms on the ground floor divided by sliding doors which could disappear into cupboards on each side. There were six bedrooms, three kitchens and three bathrooms. It had two small balconies and a flat roof. At the time of purchase people lived only on the ground floor, and the building required much overdue maintenance. 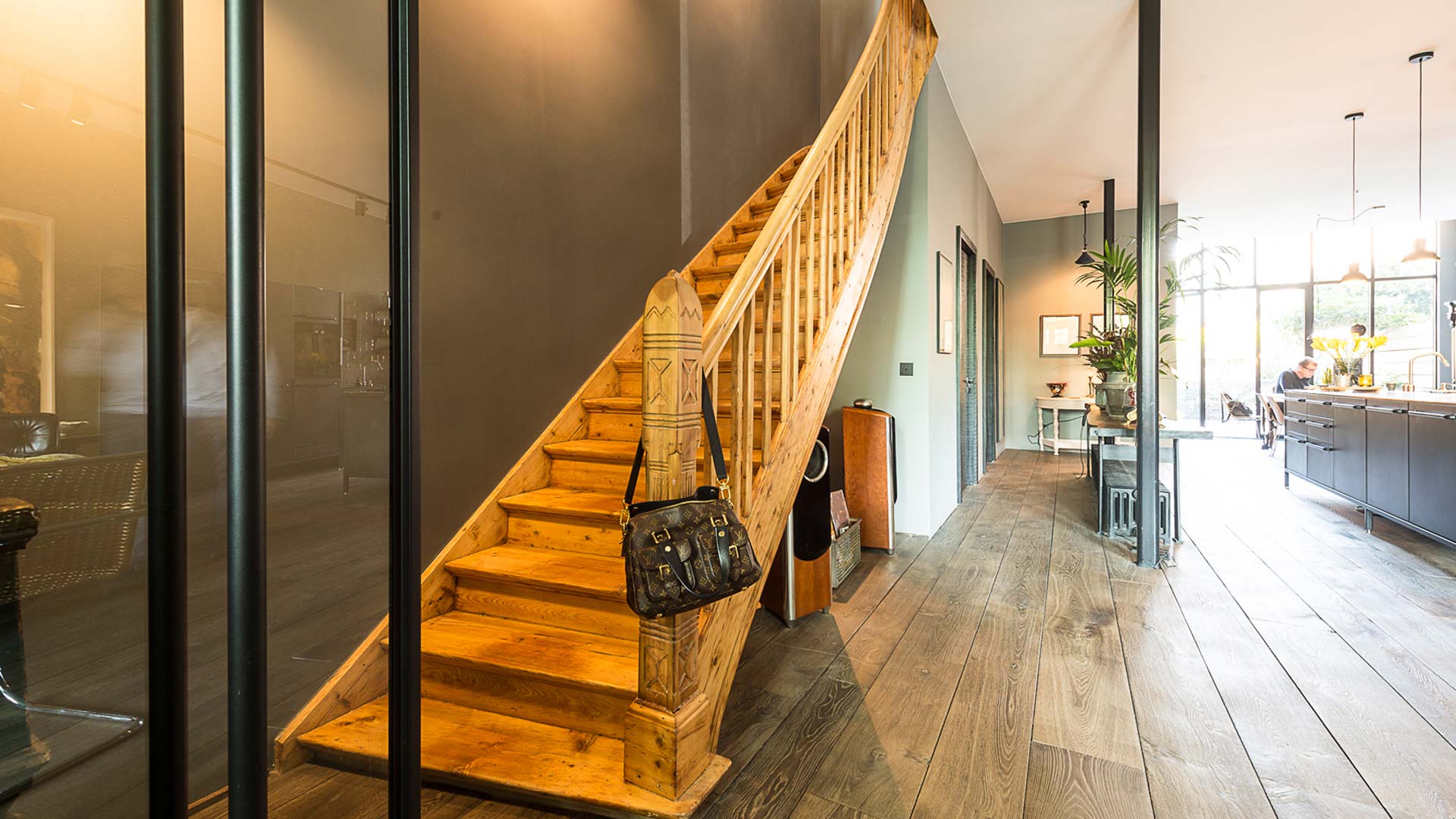 The assignment for the transformation of CASA IV was to create one space on the ground floor, to give the floors a new layout and to redesign the interior completely including the cabinets, the kitchen, the lighting, the interior doors and windows of the rear facade. The choice of furniture, material and colours was part of the assignment. 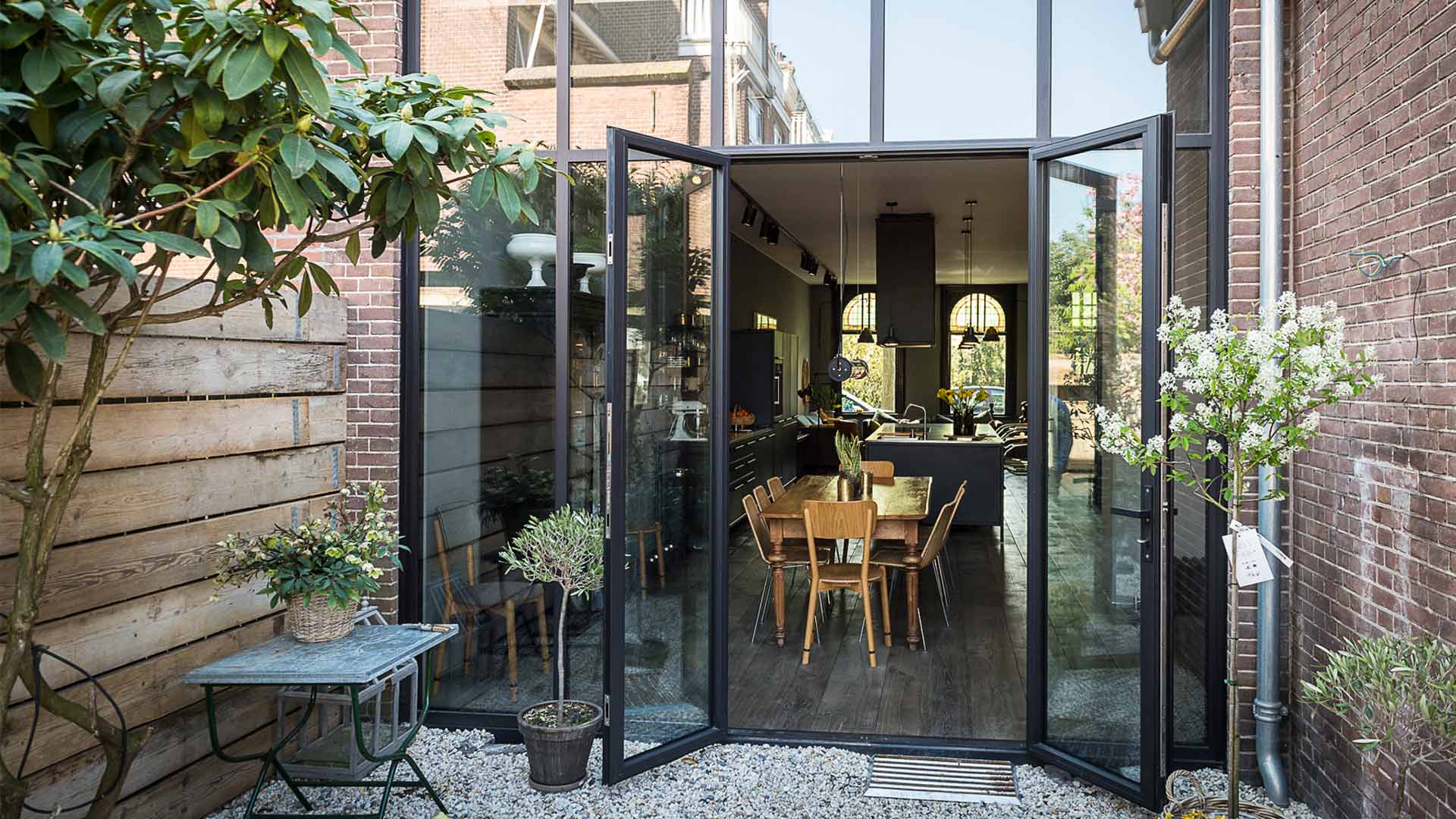 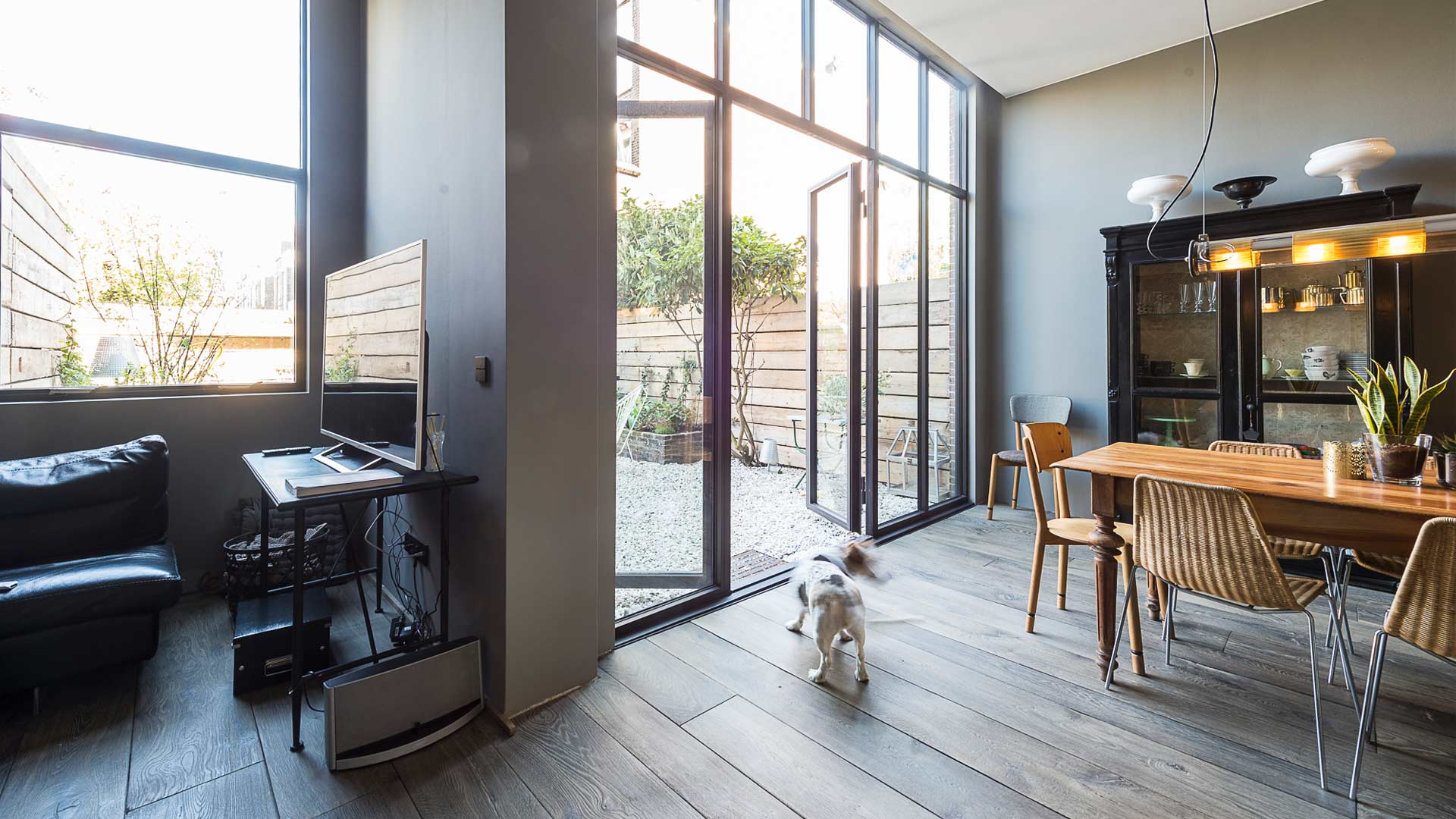 It was decided to retain the existing floors and stairs and to improve the overall infrastructure. The rest of the building has been completely stripped and rearranged according to the needs of the new residents. 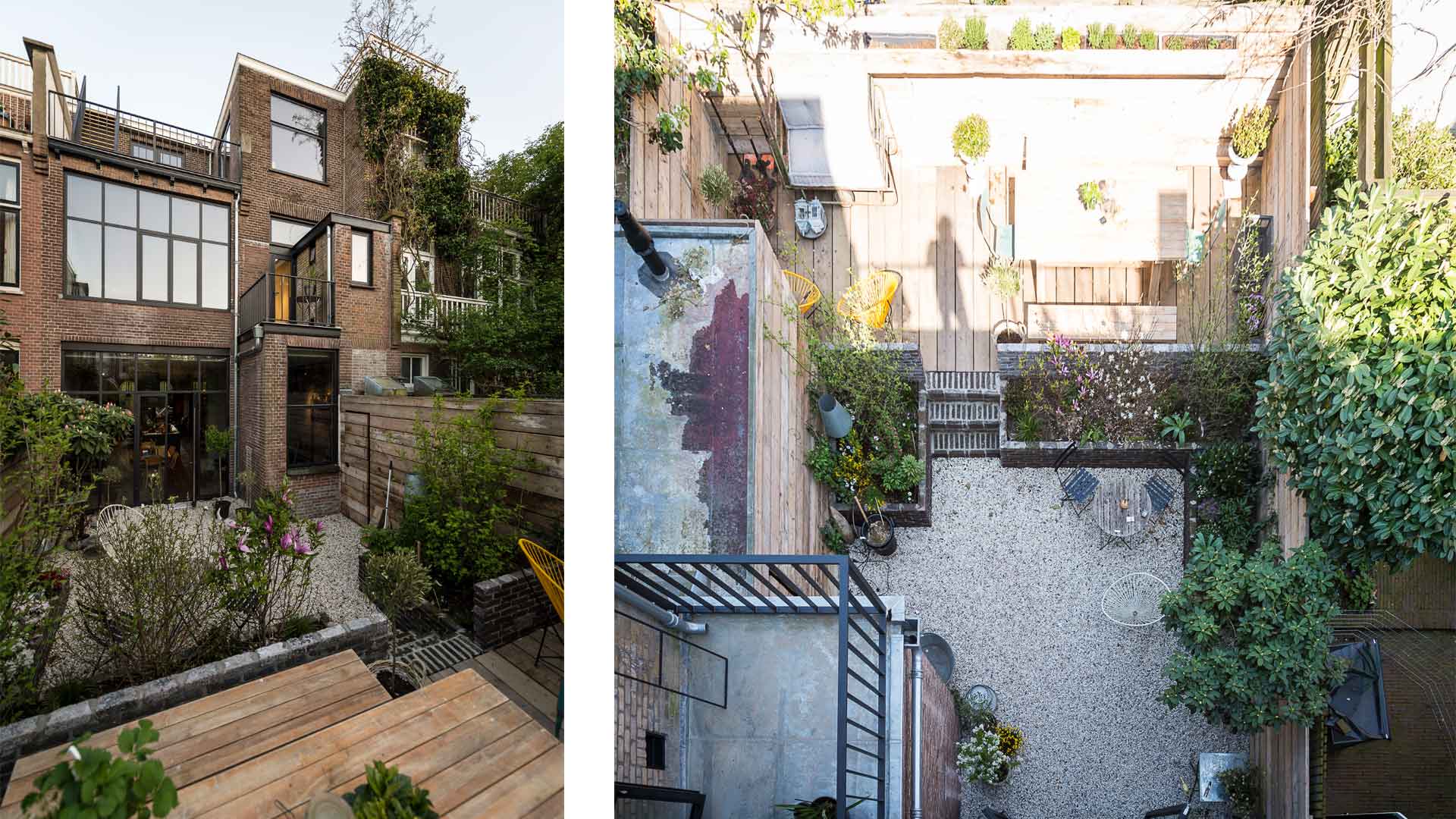 The wooden window frames of the rear facade have been replaced by black steel façade so that more light enters the house to give the facade a more modern look. In the small garden of about 70 m2 a difference in height was created so that the outdoor space enters into a spatial play with the new steel rear facade. The terraces have been restored and an extra terrace has been added to the flat roof. 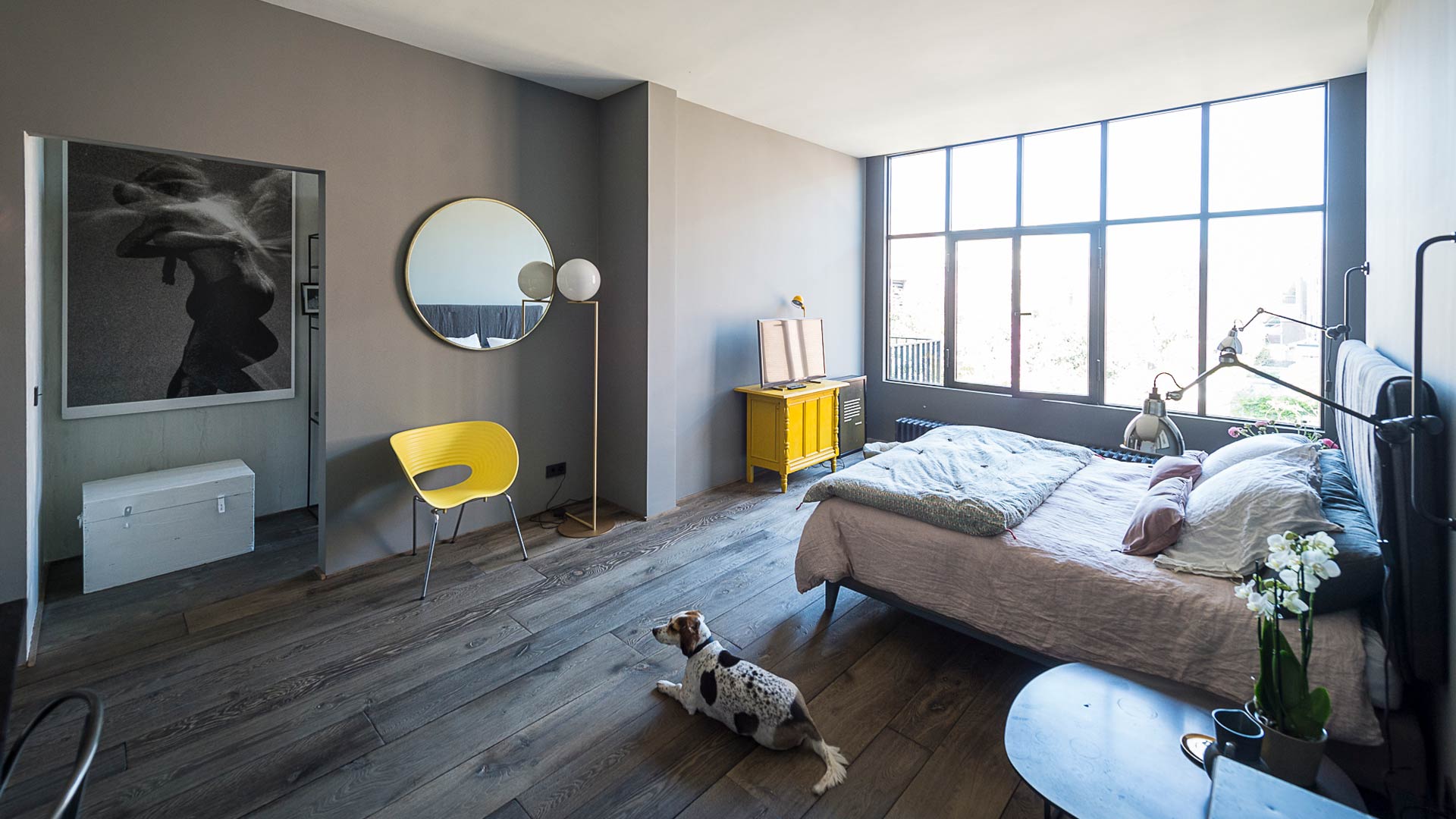 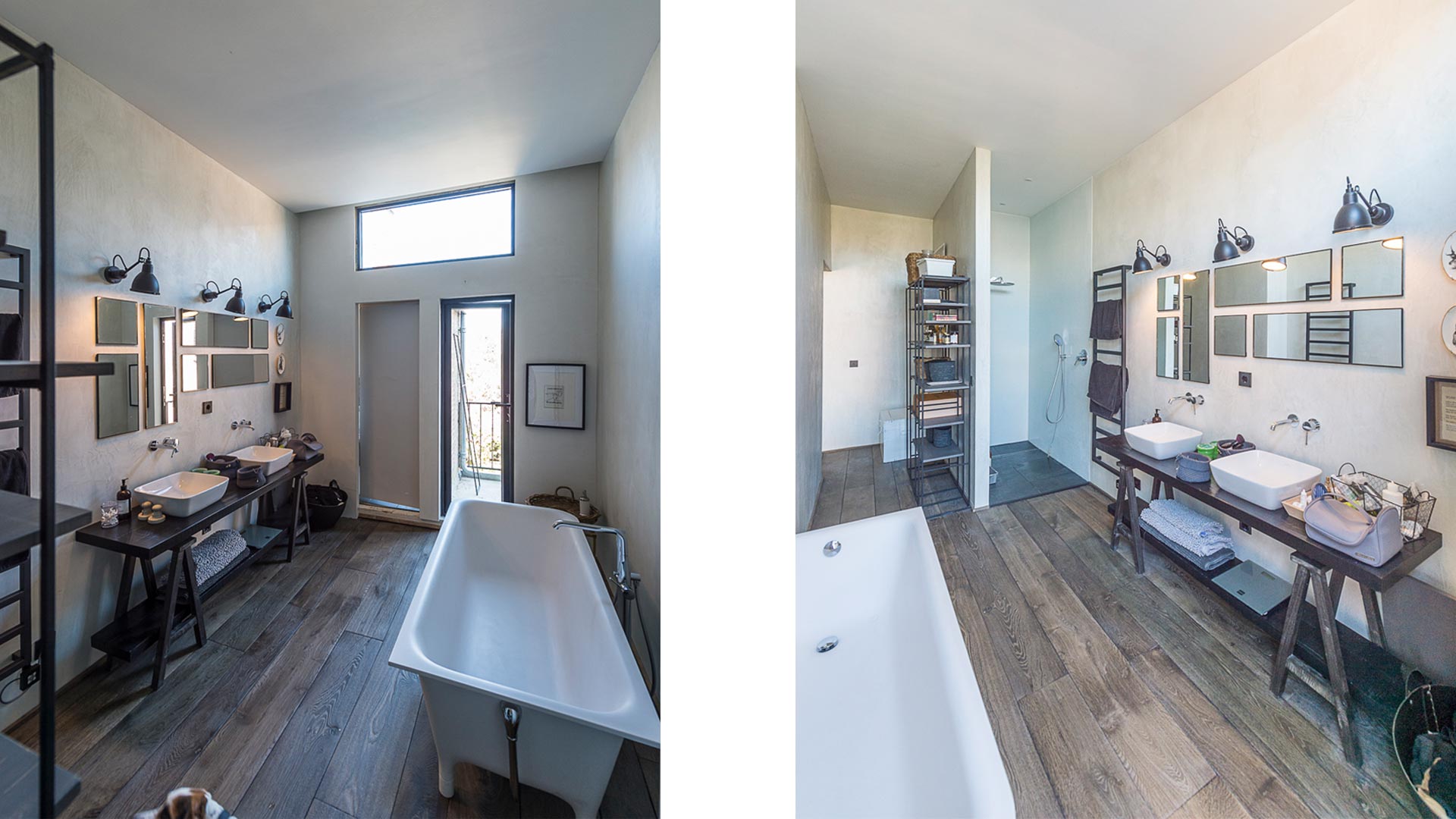 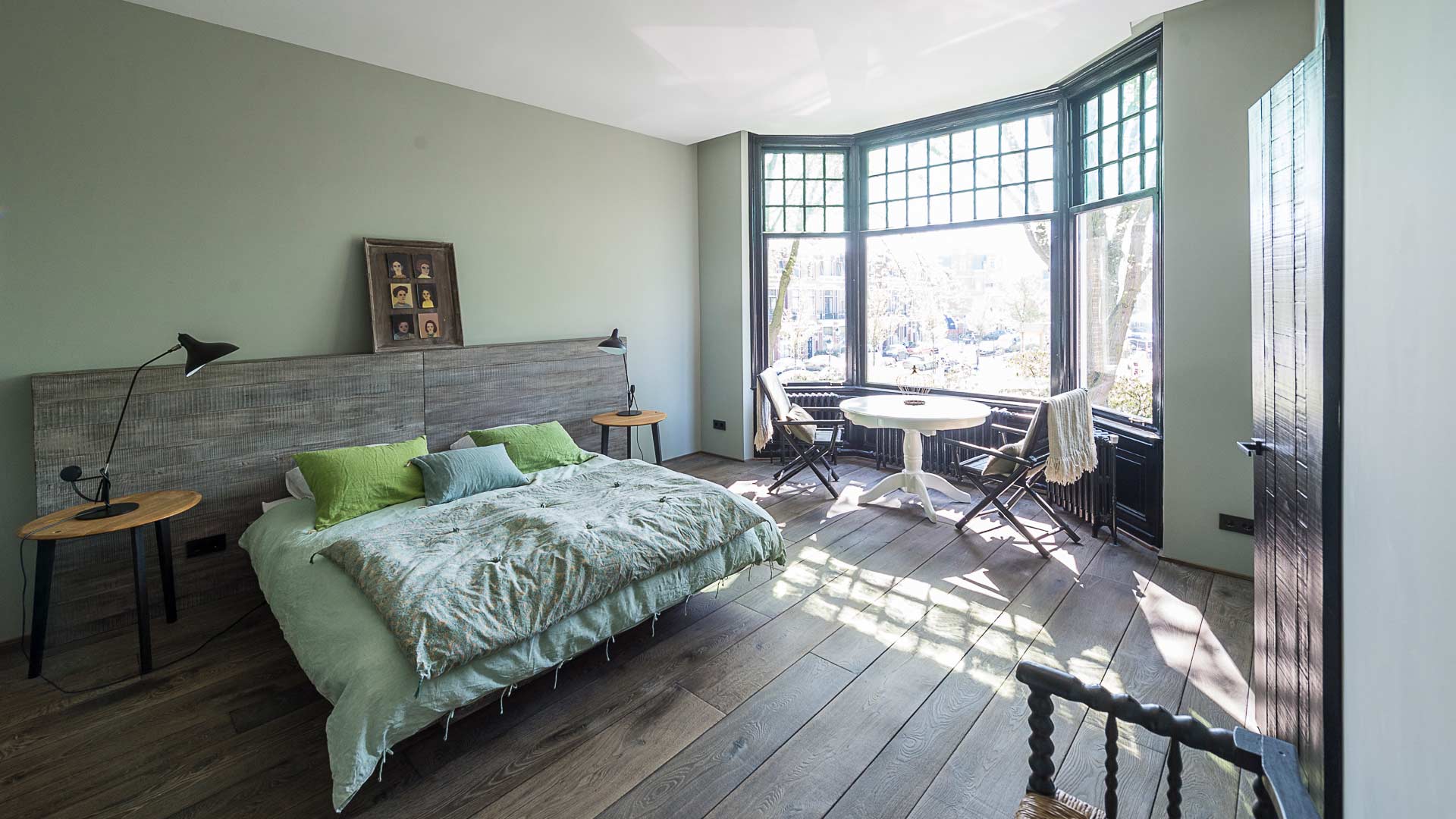 The main intervention in the design was opening up the ground floor with the result that the 15.4 meter living room was widened from 4.4 to 6.75 meters. To this end, a steel framework has been installed to stabilise the house and to make one open space out of the ground floor. Two steel columns of the frame are visible in the room on the ground floor and the rest of the frame is concealed in the walls and floors. The kitchen is now a centrepiece of the living room. The kitchen unit determines the scale of the space and divides it into a living room and a dining room. The basic colour is grey, with a dominant role for the completely black kitchen. The kitchen unit contrasts with the wooden floor and this combination creates a unique open living space.

On the first floor are the master bedroom and a guest room, both with their own bathroom. On the second floor are three bedrooms which share a bathroom. From the rear bedrooms one can reach the terraces. 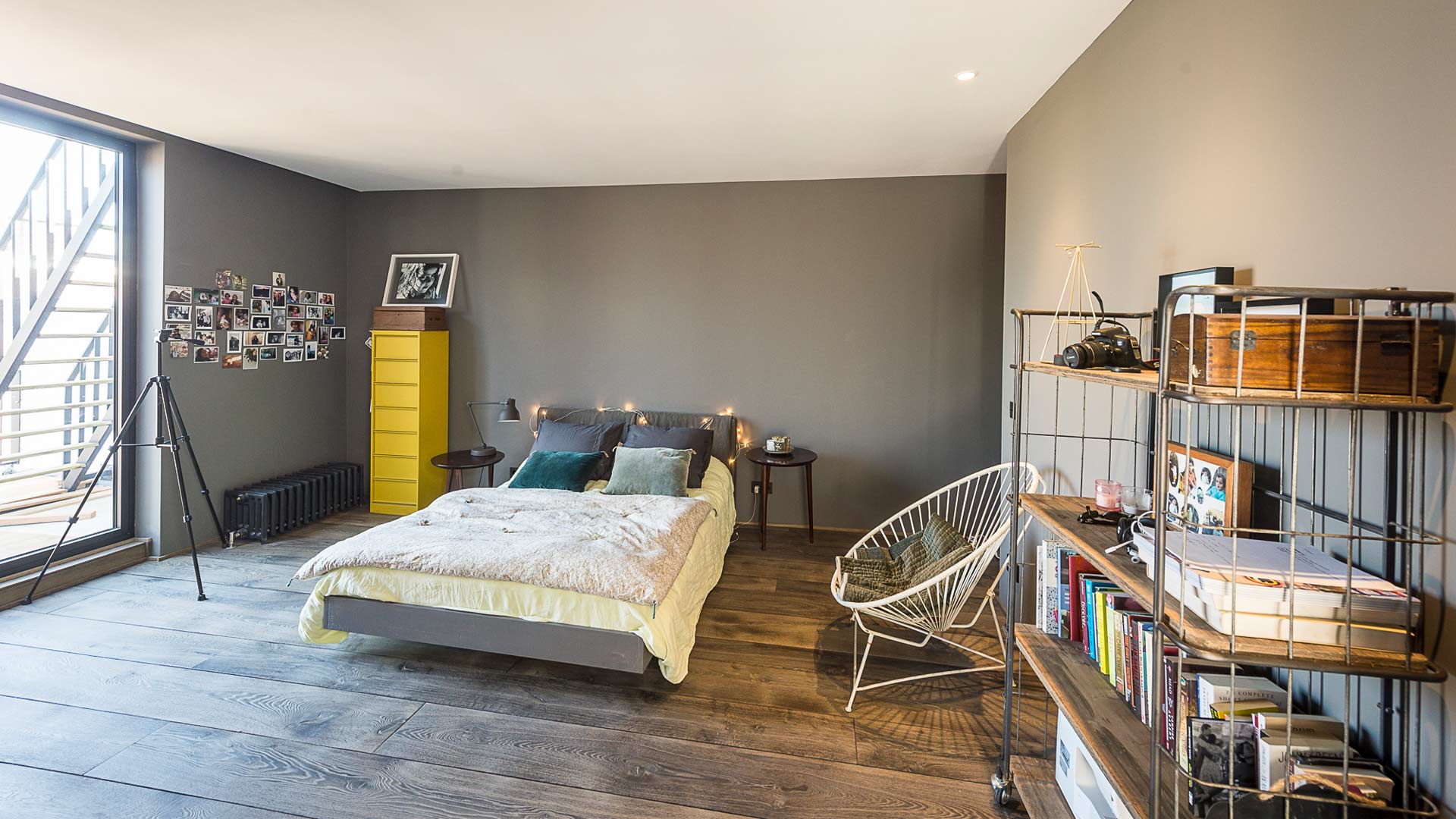 The floor planks are laid out along the longitudinal lines of the house which gives it optical depth. The warm materials, the black steel, the grey colours on the walls and the sophisticated lighting form a harmonious and pleasing balance with the furniture and the art. The interior is a dialogue between old and new, modern and traditional. The existing staircase has been restored to its original state and then stained, and the coloured-glass windows have been repaired and placed in black wooden frames. Whenever possible, original details of the old house have been preserved, and the completely new interior actually enhances them. 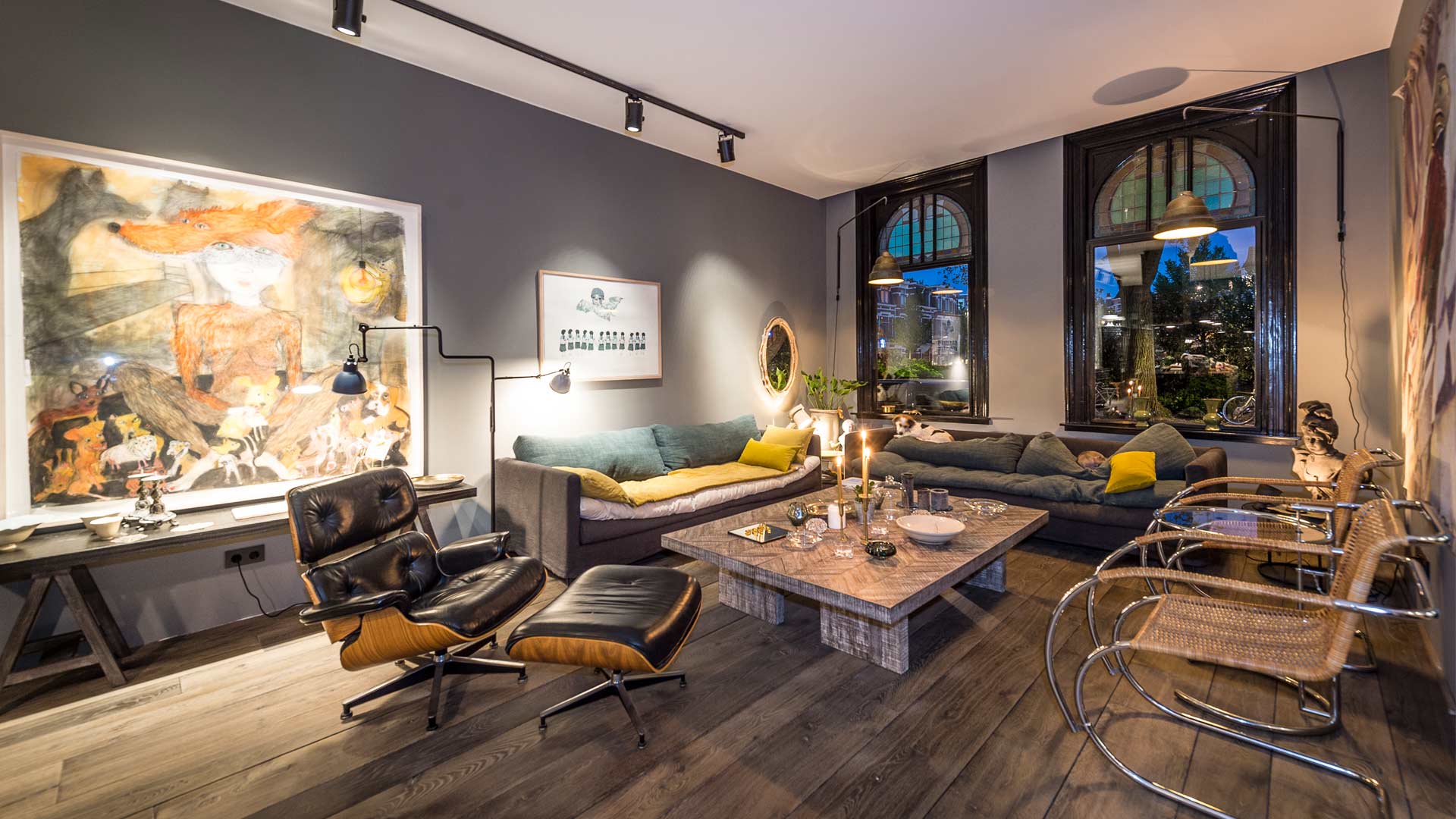 In consultation with the clients a search was made both abroad and domestically for the materials and products. The floors are of dark grey waxed wood and come from France. The steel used for the rear facade and for some doors is Dutch. The specially designed interior doors, window frames, beds and a number of custom-made interior parts are from Chile. The old, authentic radiators are from Great Britain, and the kitchen block is Danish.